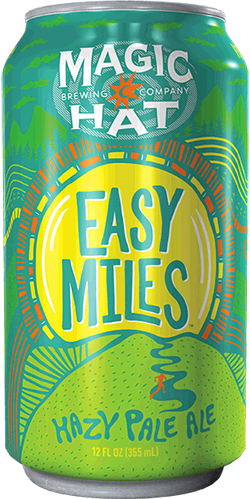 The Magic Hat Brewery has been putting a performance into every pint of beer since 1994. Today, the South Burlington, VT-based brewery puts out dozens of widely distributed and pilot batch beers each year, and the art of brewing, in all its strange and satisfying glory, has never been more accessible.

Take a Tour Upcoming Events Learn More about the Artifactory

We've got a slew of elixirs flowing from our taps that will tantalize your tastebuds and quench your thirst for fine ales! Growlers are being filled as well, but please call ahead or check what's pouring below to make sure we're pouring what your craving on the day of your visit!

Where ancient alchemy meets modern-day science to create the best-tasting beer on the planet. We have beer in big cans, small cans, big bottles, small bottles, big boxes, small boxes, so search to your hearts content! Search now with our Sipcode Locator!

Magic Hat Brewery schwag, straight from our brewery in Vermont to your doorstep! Sign up for our newsletter and you'll get the skinny on Magic Hat events & beer releases, and get discount coupons at our online store!